The Iowa Emergency Management Association is a professional society of local Emergency Management professionals united for the purpose of mitigating, preparing, responding and recovering from the effects of man-made and natural hazards in order to preserve life and protect property for the citizens of our communities and the State of Iowa. The Association is organized to protect and advance the interests of the profession and to serve the economic, educational, ethical and social needs of its members.

The Iowa Emergency Management Association exists to advance the professional interests of its members and to assist Iowans in preserving life and protecting property in the face of any hazard. 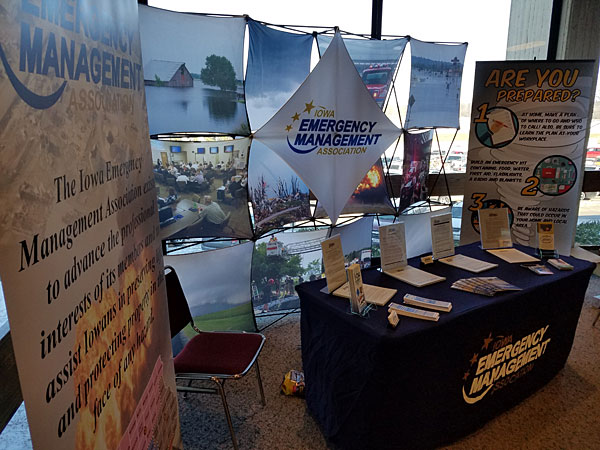 The IEMA booth at the 2017 State Fire School in Ames.

There are 11 specific responsibilities that local emergency management commissions are responsible for. They are: hazard analysis and risk assessment; resource management; planning; direction, control, and coordination; damage assessment; communication and warning; operations and procedures; training; exercises; public education and information; and agency administration. More detail on each of these core responsibilities can be found in Iowa Administrative Code, Section 605, Chapter 7.

All disasters are local. They affect local citizens, property, economies, and environments. Therefore, it is the responsibility of local government, neighbors, and businesses large and small to prepare for and be capable of responding to disasters that occur in our communities. Local emergency management agencies work to bring stakeholders to the table to address risks and work proactively through planning, training, and exercises. They are there to coordinate the local response so that resources are put to their highest and best use. Local emergency management agencies are also there serving as the critical linkage to integrate cities and counties with the state and federal partners during all phases of an emergency or disaster – preparedness, response, recovery, and mitigation.

Local and State elected and key appointed officials play a vital role in this process. Critical decision-making must take place under stressful situations. Working with the local emergency management agencies these decisions can be thought through before the disaster strikes in a less emotionally intense environment. Expectations can be shared and resources identified outside of the fog created by a disaster.

Emergency Management is the discipline of dealing with and avoiding risks. It is a discipline that involves preparing for disaster before it occurs, disaster response (e.g., emergency evacuation, quarantine, mass decontamination, etc.), and supporting, and rebuilding society after natural or human-made disasters have occurred. In general, any emergency management is the continuous process by which all individuals, groups, and communities manage hazards in an effort to avoid or ameliorate the impact of disasters resulting from the hazards. Actions taken depend in part on perceptions of risk of those exposed. Effective emergency management relies on the thorough integration of emergency plans at all levels of government and non-government involvement. Activities at each level (individual, group, community) affect the other levels. It is common to place the responsibility for governmental emergency management with the institutions for civil defense or within the conventional structure of the emergency services. However, emergency management actually starts at the lowest level and only increases to the next higher organizational level after the current level’s resources have been exhausted.

Emergency Management is one of a number of terms that, since the end of the Cold War, have largely replaced Civil Defense, whose original focus was protecting civilians from military attack. Modern thinking focuses on a more general intent to protect the civilian population in times of peace as well as in times of war.